Anakaren ? one off ? cruising design based on the Eliminator 32 hull but with different keel, rudder & rig, ex "Maggie Duff" " and sold on eBay July 2015?;
Airborne Warrior K Everitt #0039b ?, 2019 picture from Jullian Everitt website ; 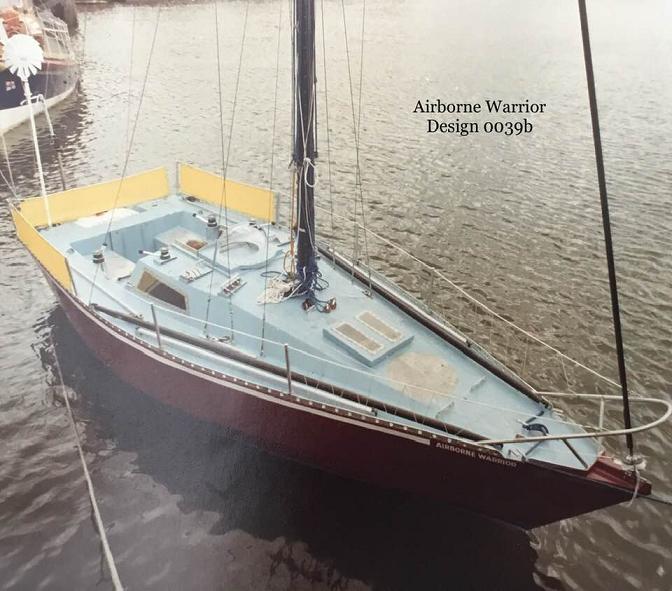 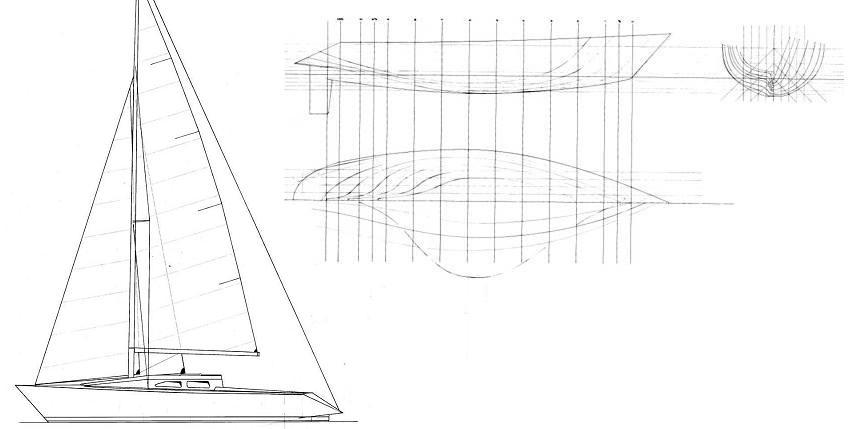 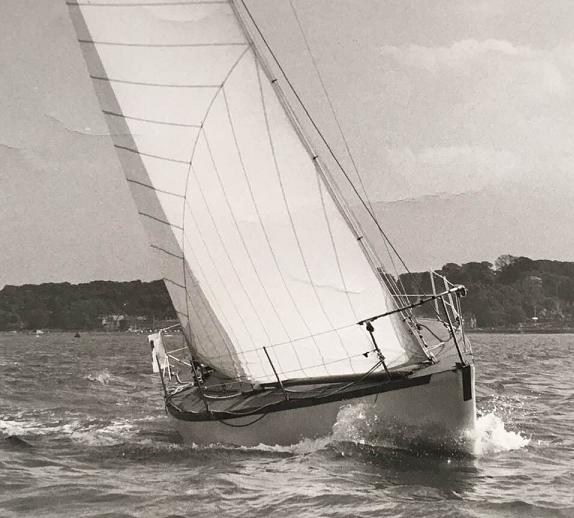 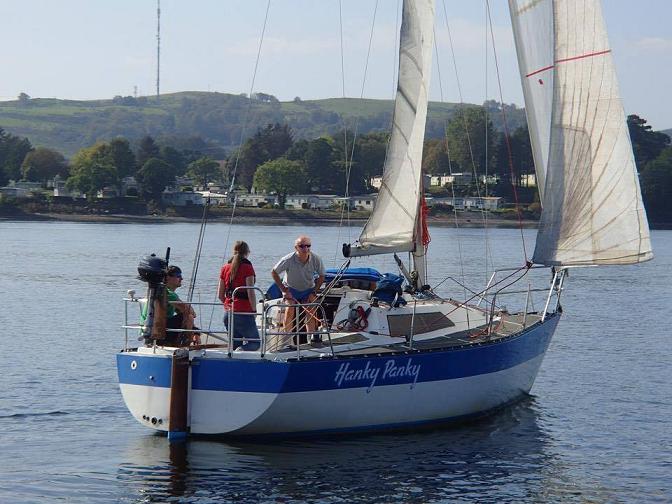 Lemon KOW Eliminator 32 ?, One of a pair sent to Kuwait with oversized rigs, whereabouts unknown, possibly destroyed during war;

Maggie Duff ? one off ? cruising design based on the Eliminator 32 hull but with different keel, rudder & rig, Scotland West coast, converted to Ketch rig, refurbished 2014 by Forbes Boat Care, renamed "Anakaren";
Minitech K 1296T Design 0098 ?, Not sure she is a Half Tonner, "One of the 30"; 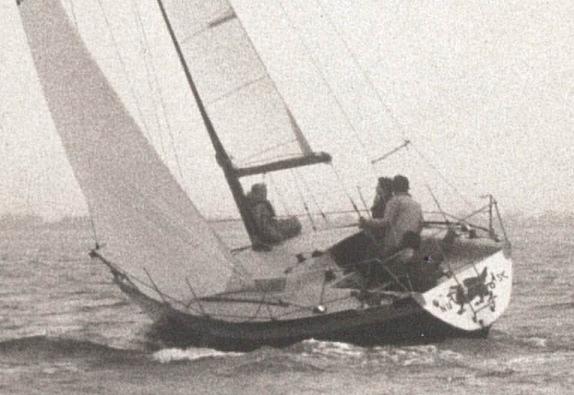 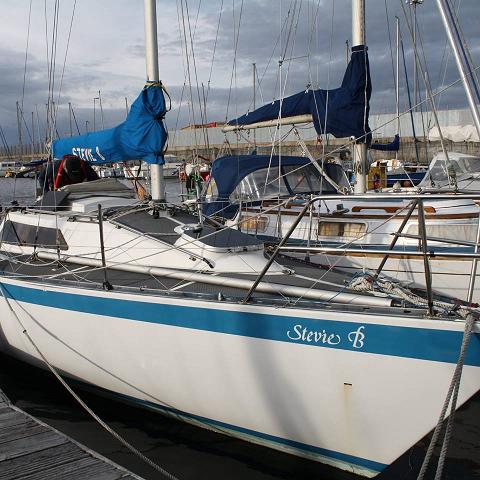 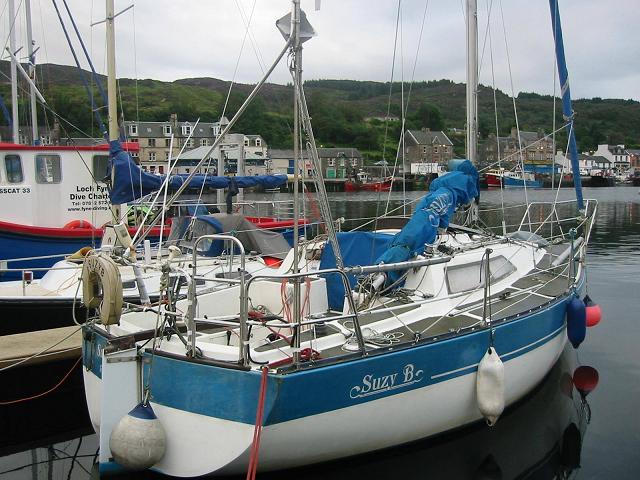 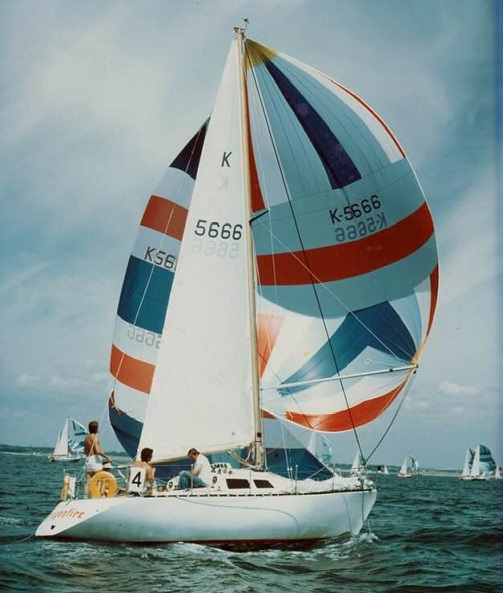 Some of these 14 designs of mine, covering 27 years, fall into the pure race boat slot while others are heavily influenced by a dual purpose requirement. There is a third category too – which is the ‘I don’t give a damn about the rule – let’s just design a fast boat’.

- Design #001: "REVERSE" is our 1966 offering. Designed to the RORC rule she is pure racer. Totally inspired by Illingworth and Primrose with a little van de Stadt thrown in on the spade rudder department. I was surprised, looking back, just how narrow the design is and by the choice of wheel steering at the front of the cockpit- Outlaw style.

- Design #009: Our next design, the Banham 29, drawn in early 1970 is our first attempt to interpret the brand new IOR. But being a grp production design she is ultra conservative. A moderately heavy, short waterline boat with a big rig, the builders required a dual purpose boat with good accommodation...

- Design #011: And then in 1971 came "Strawberry Fields". A very different beast altogether from which three further designs were derived in quick succession. Strawberry Fields was the epitome of a racing machine. Completely empty from the mast forward, she had tubular alloy pipe cots set as far aft as possible, a minimal galley, a bucket for a toilet and no floorboards. To get down below you dropped through a hatch in the bridgedeck. There was no companionway hatch or steps or even fore hatch. All too heavy. Storage below was exclusively courtesy of store bought plastic bins!

- Design #014: After the rule changes hit us so hard we did a follow up boat, "No Expectations", and addressed the chine ‘ penalty’ by running it right aft to the transom. That technically made it a hard chine boat so we could keep the beam measurement right to the edge of the chine. There was nothing we could do however about the waterline beam problem, but we did extend the waterline back even further by bringing the rudder up from underneath the bustle to behind it. It seemed to work pretty well, but as is so often the case the two boats never sailed against each other. In fact that is a historical element of this entire half ton development. I know of no situation where any of these designs have sailed against each other!

- Design #018: "Helier Skelter" in ‘73 was arguably more rule friendly. We gave up on the chines and narrow waterline, but kept the superfine entry, full stern and beam aft shape. The bustle became a bit more conventional and the displacement went up considerably so we could gain some sail area. It was our first foray into fractional rigs too seeing that you could gain ‘free’ sail area under the rule. Once again she was completely stripped out and the high freeboard allowed the deck to be almost flat with no coach roof.

- Design #015: "Strawberry Dragon" was essentially similar, but with a fully fitted interior, coach roof and displacement increase to match. We also pinched in the stern a little bit for reasons I cannot remember! Later in life this boat cruised half way around the world and now lives in Australia.

- Design #0040: Our first ‘non-rule’ Half Tonner was Eagle in 1978. This was a deliberate attempt to take the Eliminator concept , but take out the rule inspired flats. We made the bow even finer and veed and the stern as full as possible. To ‘pay’ for this in IOR terms we went for virtually no overhang at the stern and a transom hung rudder. Once again a fractional swept back spreader rig was employed. This basic design went on to be very adaptable with daggerboard, lifting keel, long keel and even winged bilge keels. As an IOR Half Tonner I don’t think the theory was ever tested. Looking back now the design philosophy had much in common with the S&S designed Columbine of 1972. I suppose this is how influences creep into designs.

- Design #0048: The design was further developed in 1979 with "Existential" using the hull and deck mouldings from the Eliminator, but extending the stern to give a truly massive overall length of 34ft. Needless to say this ‘freebie’ only survived for two season of IOR racing. In common with the Eliminator the forward waterlines are completely straight giving a fine entry.

- Design #0062: Probably our biggest rule pushing Half Tonner was the 1980 Extrovert 33. Intended as an aluminium semi production boat, a couple were also built in plywood. The multi chine shape is perfect for exploiting the measurement points in IOR and we pushed the measurement points around the stern with a big crease that we had used very successfully on the mini ton Silver Dream Racer.

- Design #0067: In 1980 we also developed the "Grace" design for an Italian builder, but this was very different again as part of the brief was to make the design road legal for towing so the beam was limited to 2.5 metres. Also required by the builders was a fitted out interior and lifting keel and rudder. This concept was quite a challenge and in order to help it rate Half Ton we looked once again at the double hull design  aft ( previously seen on No Expectations in ‘72)  to give maximum sailing length with minimum measured length. As the boat is light, long and narrow, the rig is necessarily small, but effective.

- Design #0066: The North 26 (actually just under 27ft long) was drawn in 1981 with only half an eye on the rule. She was to be ultra light, ultra fair and capable of planning. We just made sure the IOR measurement points fell on the chines and pretty much left everything else to take care of itself. As an IOR racer it pretty much proved that a boat like this can win, but it’s impossible to make an all rounder IOR boat without exploiting all of the idiosyncrasies of the rule.

- Design #0074: Next up in 1982 was our Half Tonner for racing on the Arabian Gulf – hence the name – Gulf 30. This is unashamedly a light air design. Light displacement, short waterline and big rig. The high cg keel is to help with weight concentration necessary in the ‘sloppy’ seas of the region. For good performance in a breeze the stern is full, but in this design it is balanced with a fuller bow to help reaching and running speed.

- Design #0084: In 1985 came "Lightning" – basically a development of our Eliminator design which we still felt had plenty of potential. The main differences in the design were in the bow area where the sections were much softer.

- Design #0124: Our final tilt at an IOR Half Tonner came right at the end of the IOR era in 1993 with "Platinum". It was slightly tongue in cheek as the owner’s primary interest was to race JOG and this series had, by then, gone over to CHS. We decided to make the key points of THE EVOLUTION OF OUR HALF TON DESIGNS FROM 1966 to 1993.