1977 US Half Ton Cup: 4e/12, Chris CORLETT, Failed to win due to protest in offshore race,
Picture and comment from Peterson Facebook 2019,

"Leading the fleet (US8866) during the Half Ton North Americans in 1977, with eventual Champion "Petrified" (Chuck Burns HT) on her stern. Originally considering a keelboat, Chris Corlett sailed in the 1977 SDYC Ton Cup and saw Dave Ullman's fractional, daggerboarder Peterson Quarter Tonner Blitz, Design #39. He immediately knew he needed a HT version of that boat. Robbed of the HT North American Championship by a questionable protest in 1977"

1978 US HALF TON CUP, Annapolis: 1 - 1 - 1 - 1 - 3 = 1er/??, ??
"Oooh Noo!! came back and won the 1978 North Americans with a score of 1-1-1-1-3. She was probably the fastest IOR Half Tonner ever in the USA, before the boats were slowed by changes to the daggerboard loophole and light displacement penalties"
Sold boat, didn’t go to Worlds, where she would have been a favorite.
StFYC Stone Cup: 1er/? Division D
Picture from Peterson website,

SF Bay Boat of the Year
Picture from Peterson website, 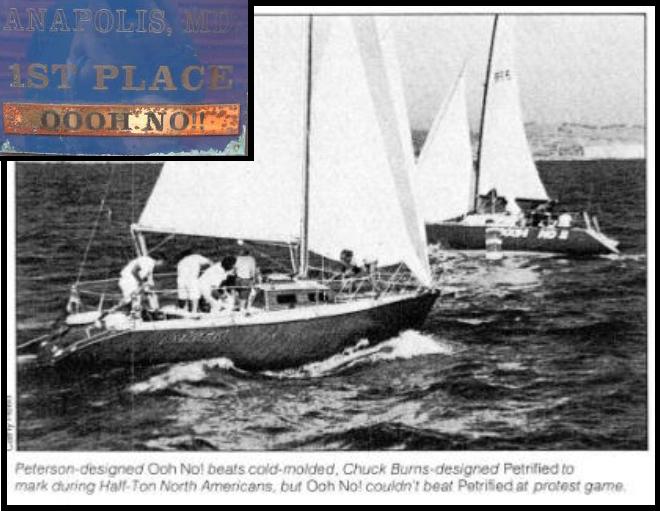 Picture and comment from Peterson Facebook 2019, "Last week we looked for SCORPION, and found she had been sold recently. So next up for the Half Ton resurrection project would be to find this one. Last seen more than 10 years ago on ebay in Wisconsin (?) with a bid for $1500. This photo is from that listing."