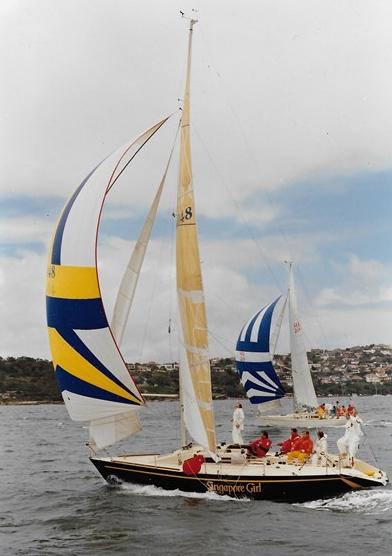 About 1999 ?-Port Lincoln: ?e/??
Picture and comment from Facebook 2021 "finishing in Port Lincoln about 1999 with serious kite off a Davidson One tonner Sun something."

20?? For Sale, Singapore Girl is a well renouned Laurie Davidson 34 with a long successful racing history going back as far as 1987-88 where she was CYCA Blue Water Champion and won the 1988 Jupiters Sydney to Gold Coast Regatta. After that her name was changed to Legand where she raced out of Middle Harbour Yacht Club and then finally South Australia where the yacht continued to produce a string of wins. Her name was later changed back to Singapore Girl. New Beta 25hp engine installed 2012 with only 260 hours. New switch board and new wiring installed 2016. Antifouled, engine serviced and new dripless shaft seal installed July 2019. Major service on Engine July 2018. October 2016 Survey available upon request as well as invoices for work carried out in past few years. Length 34' 4" - 10.46m Beam 3.54m Draft 2m Keel / Ballast Cast Lead Fin Keel with small Torpedo bulb, Hull Material Fibreglass/GRPDeck Material GRP Engine Excellent condition Engine Make Beta HorsePower 25 Fuel Type Diesel, PRICE AU $24,900,

2021 August, from Facebook, "This was my nice little Davidson 34 Legend on our way to Hobart in 1992. She was well known as Singapore Girl but I changed the name when the airline declined to sponsor us. I sold it to South Australia but I have heard it is back in Sydney under the old name. It’s in Sydney for sale. Great boat."

"Was in Hobart for many years before moving to Sydney, on the delivery the singlehanded owner was helicoptered off."
"Doug Smith brought it over from S.A to the RGYC sailed here for many years then went down to Tassie Great owner top yacht"