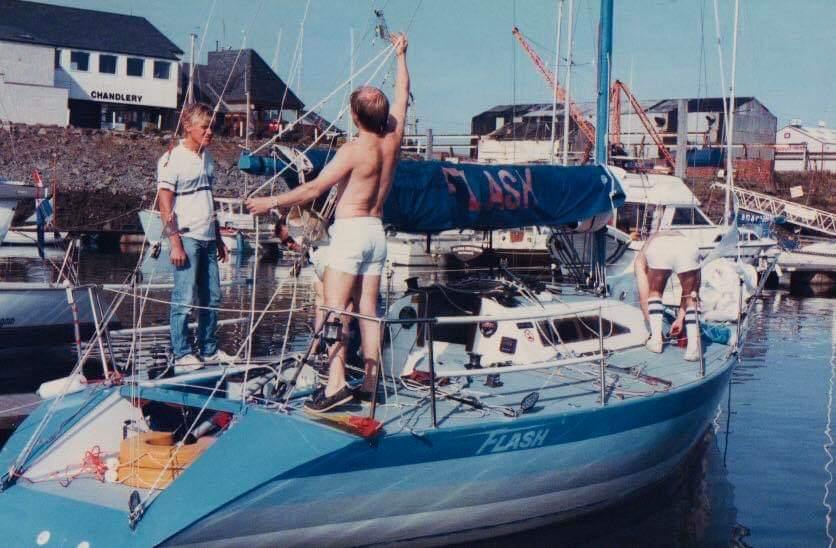 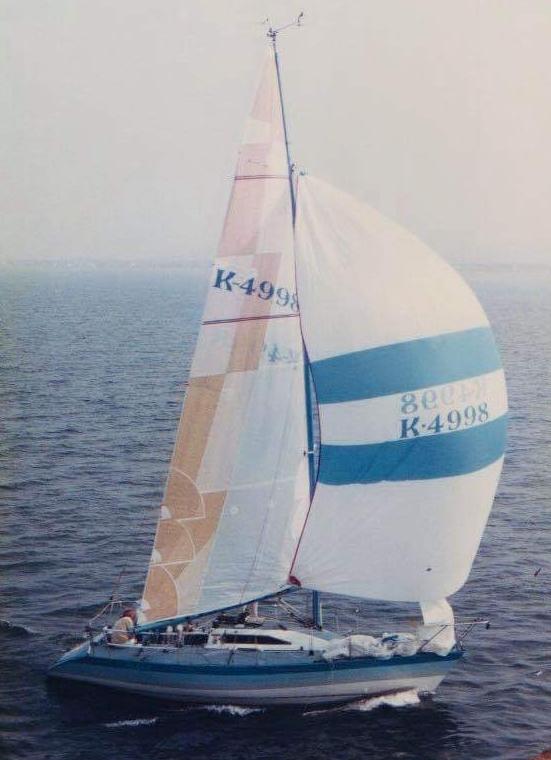 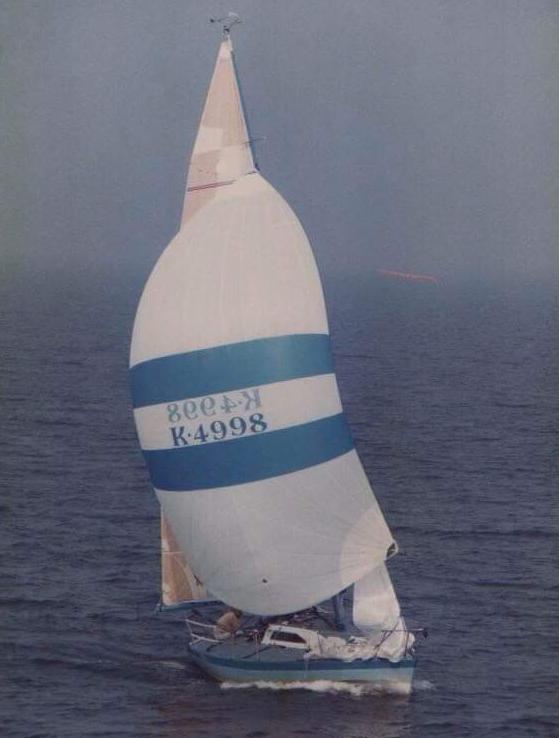 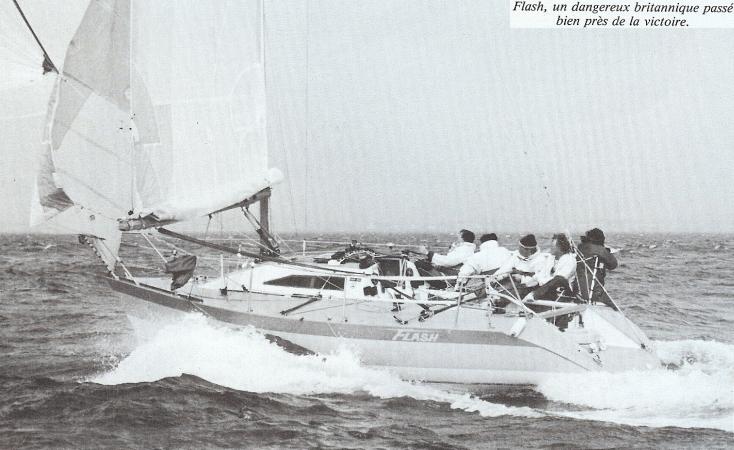 Picture from 'Howth- a century of sailing' by W.M. Nixon, 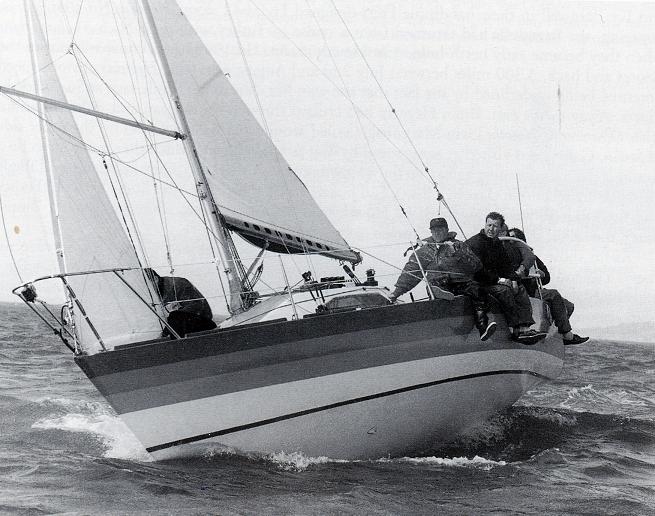 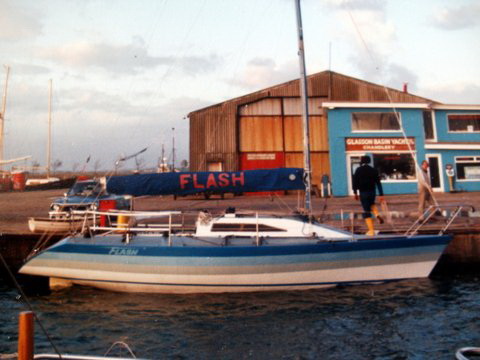 "Flash is the boat that raced in the Troon Half Ton Worlds. Picture take 1980s at Glasson Basin Yacht Marina before going to sail
at Blackpool and Fleetwood yacht club berthing on drying jetties." 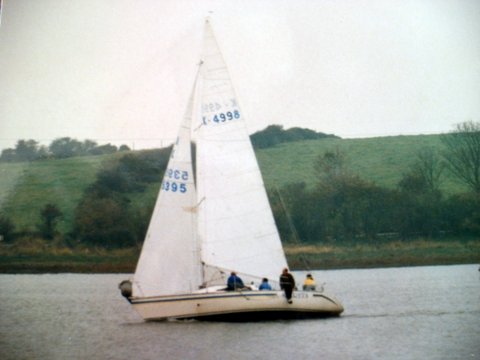 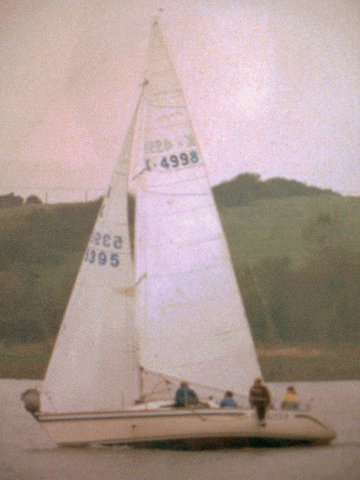 "2 Pictures of an unkown Half Tonner racing at Blackpool and Fleetwood yacht club. The sail number may help identify it."
Geona with different sail number... witch name and when??

199? Flash performed well in the 1990’s after John Corby designed a new keel for her. She was campaigned by? And subsequently sold to?

2011 Mars, For Sale, Hurricane Humphrey ex Flash one of Rob Humphrey's half tonner designs near sister ship to Harmony half tonne winner Dublin 2007. Flash was built for the 1984 Half Ton Cup in Troon, Scotland where she was sailed by Laurie Smith and was piped by Cofica and was won again in 1987. Built of Kevlar with Balsa core sandwitch and Carbon Stringers over a John Corby LCG Keel. Last rating IRC 943 using a 54m (standard 48m) spinnaker and LCG keel. Hull, Rudder and Keel is in great condition and have been fared. 18500 Euros, lying Cork, Ireland.

2015 Information and picture from Humphreys website: "With the Half Ton Cup scheduled for UK waters in 1984 (Troon, Scotland), there was significant Half Ton interest in 1983, and one of these aspiring challengers, Barry Bullen, came to Humphreys for his design. In fact, after results shown by Roller Coaster, Glafki III and others, interest was fairly widespread and Bullen arranged with MG Yachts of Scotland for Flash to be built as the plug for a new production design that MG Yachts would offer as the MG HS30. The best known of the production versions were Humphrey Go-Kart, Local Hero and Heart of Gold, but it was Flash herself that was to make best account of herself. Flash won the UK Half Ton trials in 1984 and went on to place a close second in the World Championship behind the French Cofica, with Humphreys joining Barry Bullen and Lawrie Smith for the long offshore race. Other results we have documented are the first overall in Clyde Week. Coming back to Flash’s performance an interesting re-gearing process took place during the 1984 season. Originally at her best in stronger winds, it became evident to Humphreys and Smith that a high pressure system was sliding in slowly, threatening a period of lighter airs that would likely extend to the worlds. New sails were in any event planned for the championship, and Humphreys went about a re-optimisation process that under Flash’s new rating turned her into a very strong light air contender. The forecast proved correct and the successful re-alignment of the boat’s parameters illustrated the increasingly detailed attention that would be required for major international competitions." 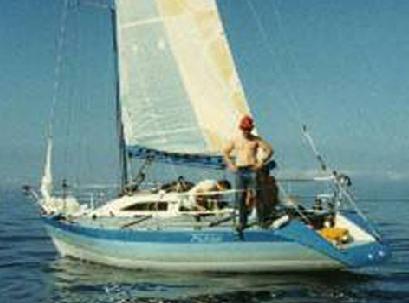