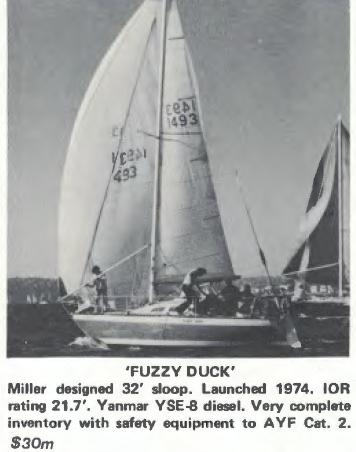 Posted March 27, 2016 "Sailed on a 1/2 toner "fuzzy duck" in Sydney harbour circa 1990. The boat was I think a Miller & Whitworth 32. I left for Auckland in December 1990 and got a call from the owner to sail the boat in the south China sea series 1992. He was a movie and tv sound man (Les McKenzie) and had relocated to Hong Kong. The boat was unbelievably heavy and not competitive. In addition it had twin forward hatches that did not seal and did a Niagara impression. I managed to get a kiwi to come with me to HK who knew what he was doing and we jagged a couple of light airs results to finish mid pack. Miraculous! coincidentaly I was at a medical conference in Auckland 20 years later and ended up at dinner sittin next to the original owner of the boat. The boat was fittingly bright yellow. It was the last boat I ever sailed on that was cross winched. Also the winch handles inserted into deck sockets away from the winches. She was solid in a breeze and I had one magic evening reaching at 9 knots across Subic Bay in a 25kt NE in a flurry of phosphorescence,followed by a beat past Corregidor and across Manilla bay into town."