"Silver Shamrock III was Ron Holland’s first centreboard yacht, designed for the 1977 Half Ton Cup which was held in Sydney just before the Southern Cross Cup series of the same year. Given the pedigree of its designer and crew, which included Harold Cudmore and Butch Dalrymple-Smith, the tiger-striped yacht was expected to perform strongly in the series. The boat was constructed in a highly developed timber and carbon fibre layup, with a fractional rig. Her maximum beam was more amidships compared with her main competition, namely the Bruce Farr-designed boats such as a Gunboat Rangiriri and Laurie Davidson's Waverider. She also carried a degree of tumblehome, and a transom only half the width of the Farr and Davidson boats - the stern was distinctive in the way that it tapered to a narrow rounded tuck. Despite her lightweight construction, she displaced twice that of the Farr and Davidson boats, weighing in at some 7,000lb. Some of that displacement was attributable to last minute additions of ballast to bring Silver Shamrock III up to her Half Ton rating (21.7ft IOR). The crew ran out of time with the boat and the ability to optimise its rating. Approximately 625lb of ballast was added to the boat, and this was considered, not surprisingly, to affect the yacht's reaching performance." RB Blogs 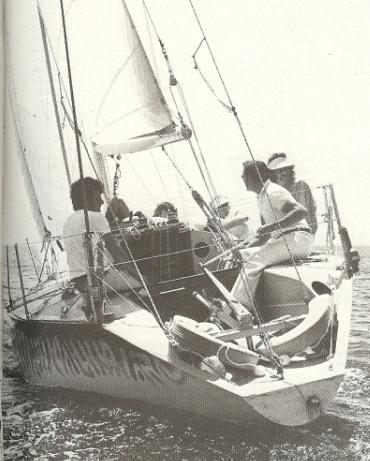 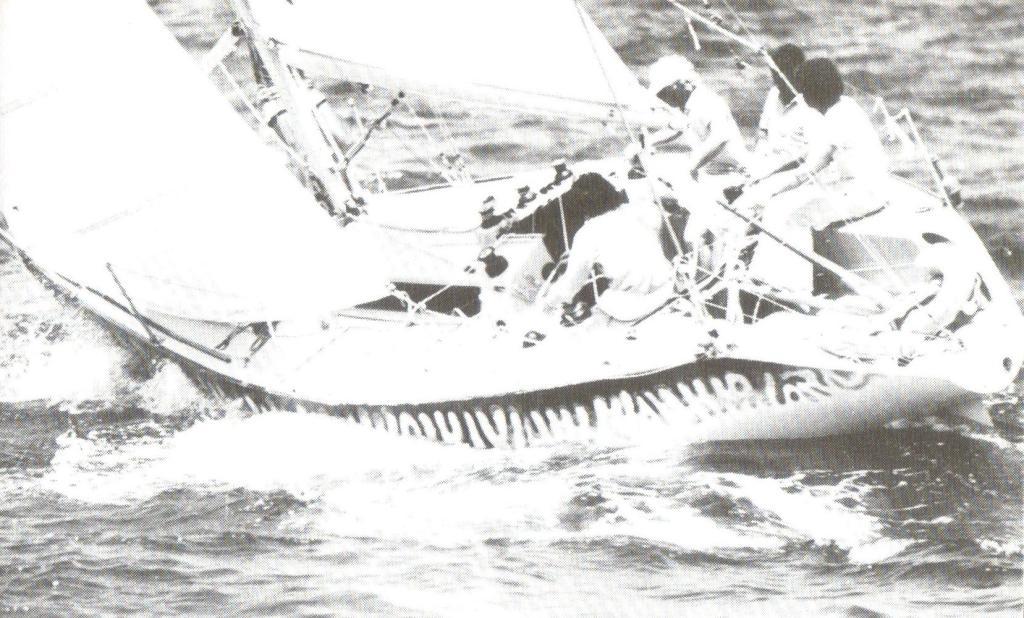 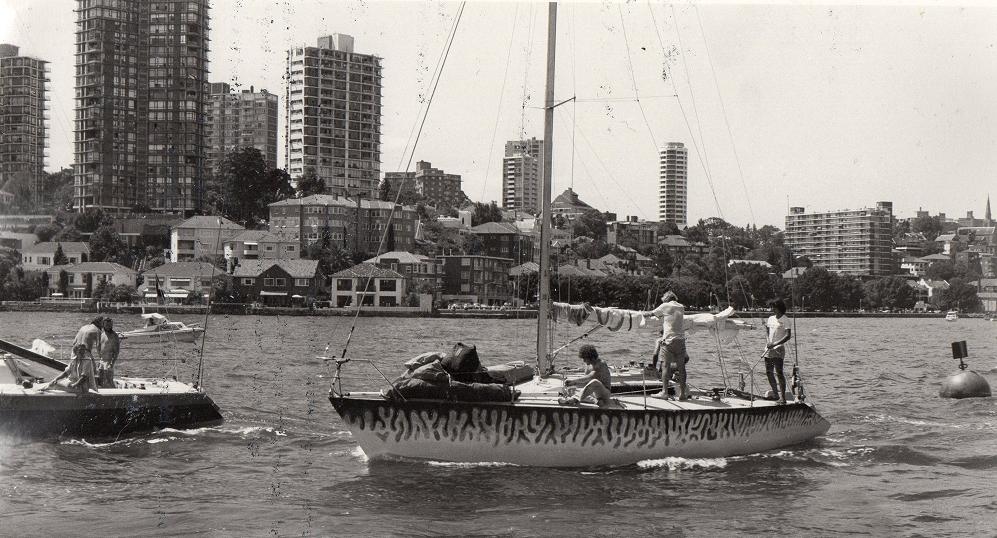 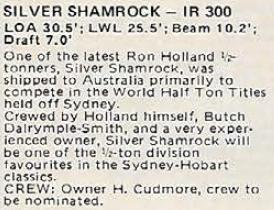 26 December, Sydney-Hobart: DNF/130, membrure cassée,
Cudmore commented when he reached the fishing port of Ulladulla, “We are not out to kill ourselves – the storm was very bad and we didn’t want to take any risks.” 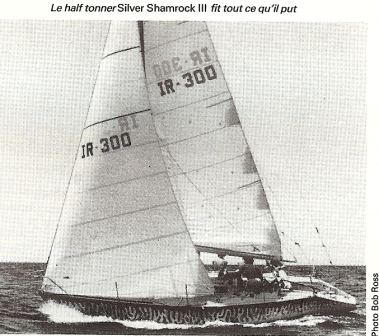 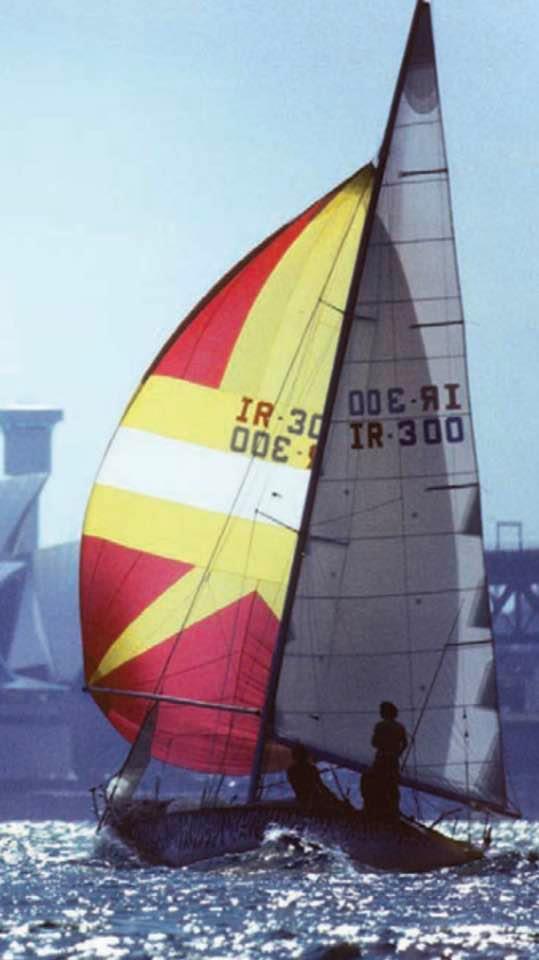 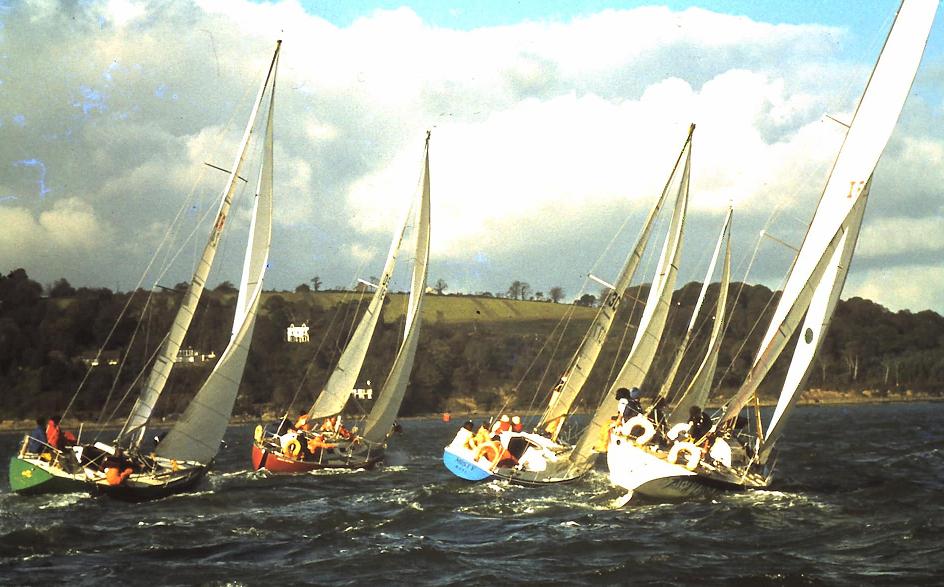 1982 Mooring in Sydney
New owner, then refitted in Brisbane

From Facebook 2021 "Found her on a swing mooring in Sydney Harbour in 82. Full of fresh water. Believing once a fast boat always a fast boat, I purchased her and trucked her to Brisbane. (Deck was damaged when she hit a low overhead bridge) Then started big renovation. Shallowed the cockpit to make it self draining out the stern. (Got rid of 2 thru hull fittings) Couldn’t work out how to redo the “mackerel” paint job. I had seen a sexy paint job on Unchu at the clipper cup so copied that. Ran out of time and money before the local Gladstone race and put the Sterns rig back in and it promptly fell over 1 hour into the race. Then put in a narrower and lighter triple spreader rig and some new North sails and just started winning everything we entered except the downhill coastal races. We were leading the inaugural Hamilton island race week until we got shut out by tide in the final long distance race. Sold her in 85." 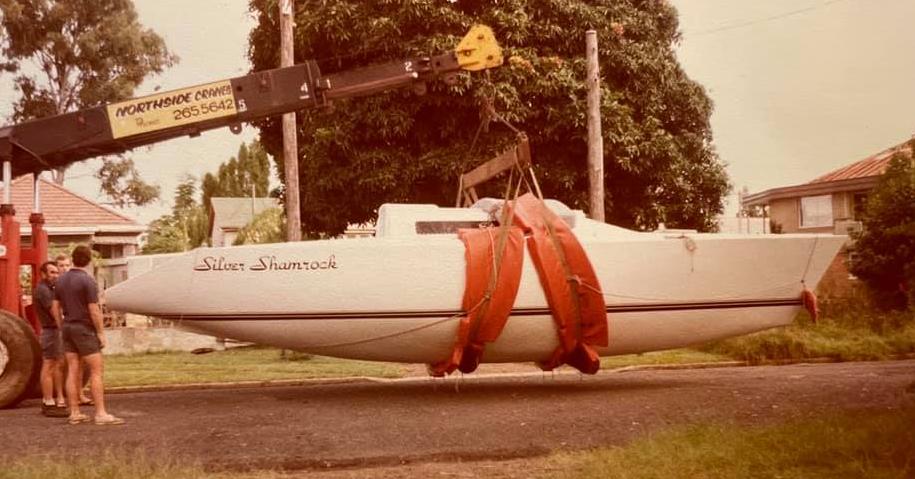 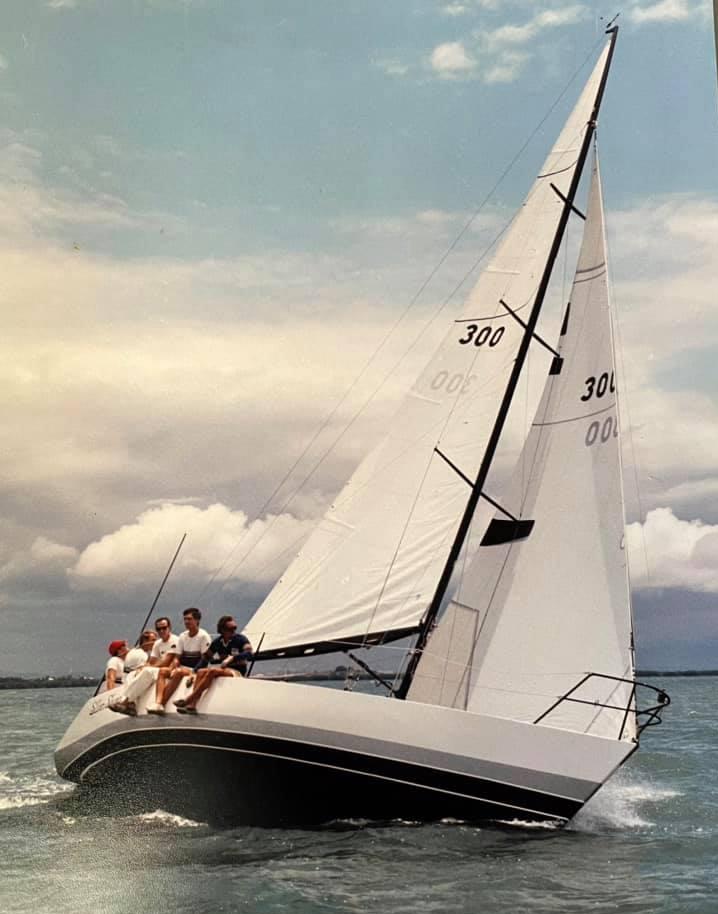 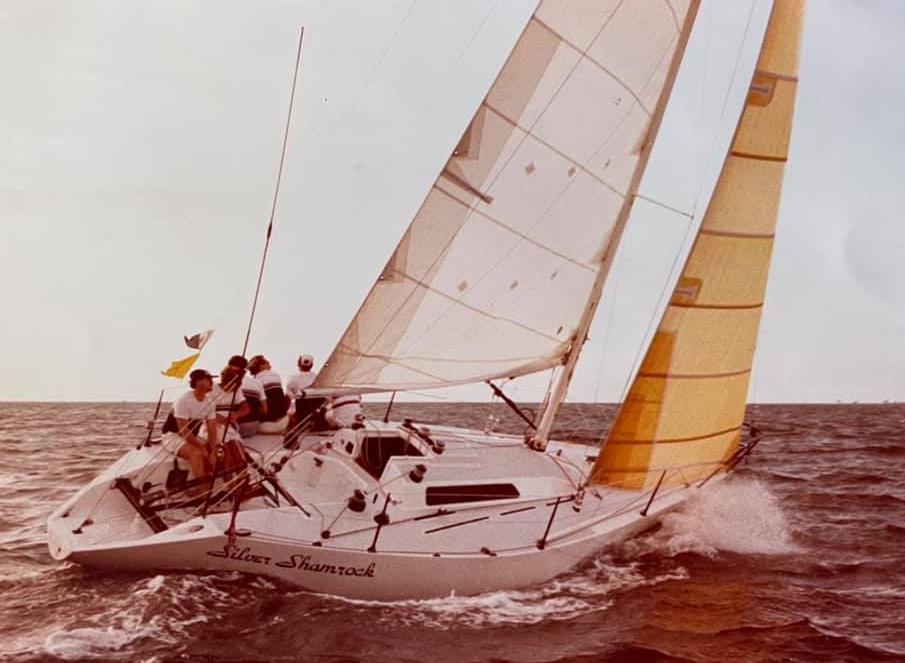 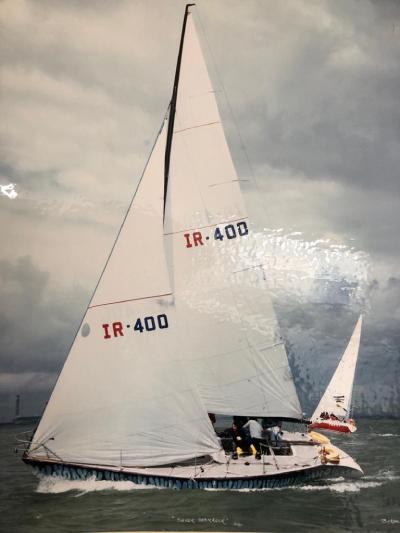 2010 One off half tonner designed by Ron Holland and built by Killian Bushe at the Shamrock yard for Harold Cudmore in 1978. This is a project but much work has already been completed. The sale includes old sails, Yanmar engine, mast and rigging, stanchions, pulpit, all winches etc. There is no trailer with the boat. This is a unique boat with a lifting keel. Builder: Shamrock, Year: 1978, Length Overall: 30', Price: EUR 4,500
From Sailing Anarchy: "Read your piece on the site today. I have an old half tonner that I am restoring. It was called Silver Shamrock IV and was built in 1978. This one has a lifting keel and was originally built for Harold Cudmore in the Shamrock yard, with the build team leader Killian Bushe no less. (It is written into the laminate) Its a great looking boat and one day I will get the time to get it back to what it once was. For those who have never seen such a thing, the original IOR cert is attached!
Best regards. Andrew Deakin" 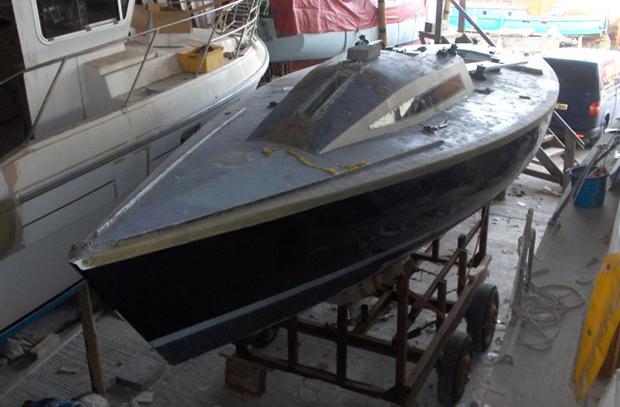 2022 April, comments and picture from Facebook " Regardless of whether he has no owner or if he does or there are heirs. That boat must pass an official technical inspection, it must be maintained and it must be forced to have good maintenance, otherwise it must be expropriated and put up for auction. That is the solution. But as soon as possible before it deteriorates further."
"Last time I saw her about 3 years ago,she had been pulled out the water by WWI in a little harbor north of Portumna and was in one of WWI auctions,Not in great condition, I think the rig was in Ryan and Roberts shed down near Foynes on the estuary"
"Portumna co Galway Ireland I believe" 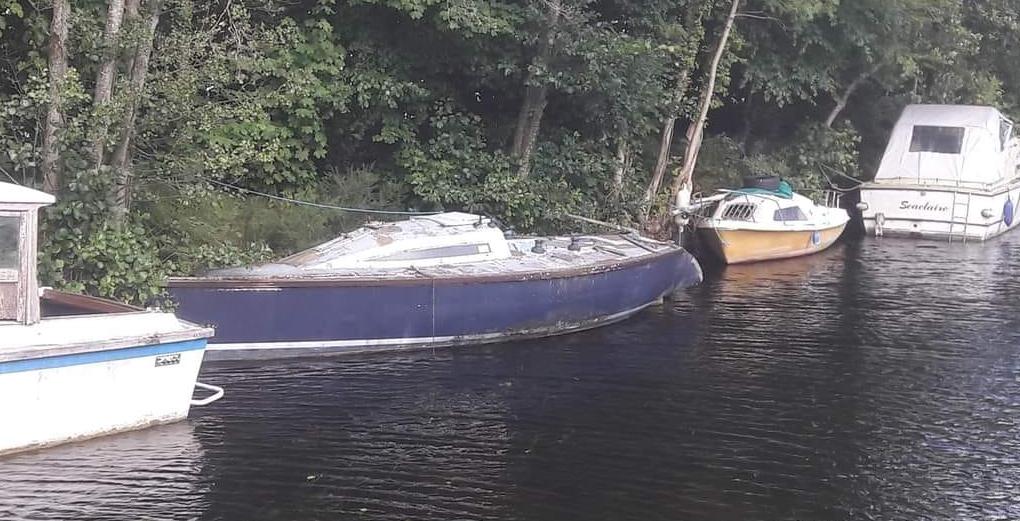