2000 Around New keel and rudder

2021 July, launched
31 July, Cowes Week: (ocs) - 3 - 4 - 4 - 1 - 3 = 2e/14 IRC 5, Christopher AGAR
Mid of August, received from Christopher,"Boat has been unused for nearly 20years. I has just finished a complete refit by myself the current owner to bring her up to spec with the current modified half tonners. The keel and rudder were changed aprox 20 years ago by a previous owner. I have extended the topsides and deck aft, put a new transom on the boat and put a new cockpit in, the boat has had a complete respray, new mast, boom, pole, winches, clutches, standing and running rigging. The boat came out of the barn she was in at the start of july. She was then RORC weighed and measured." 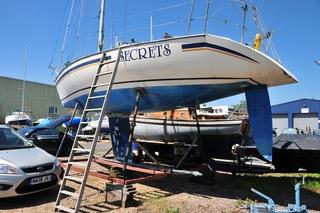 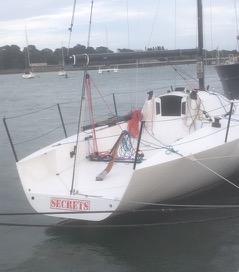